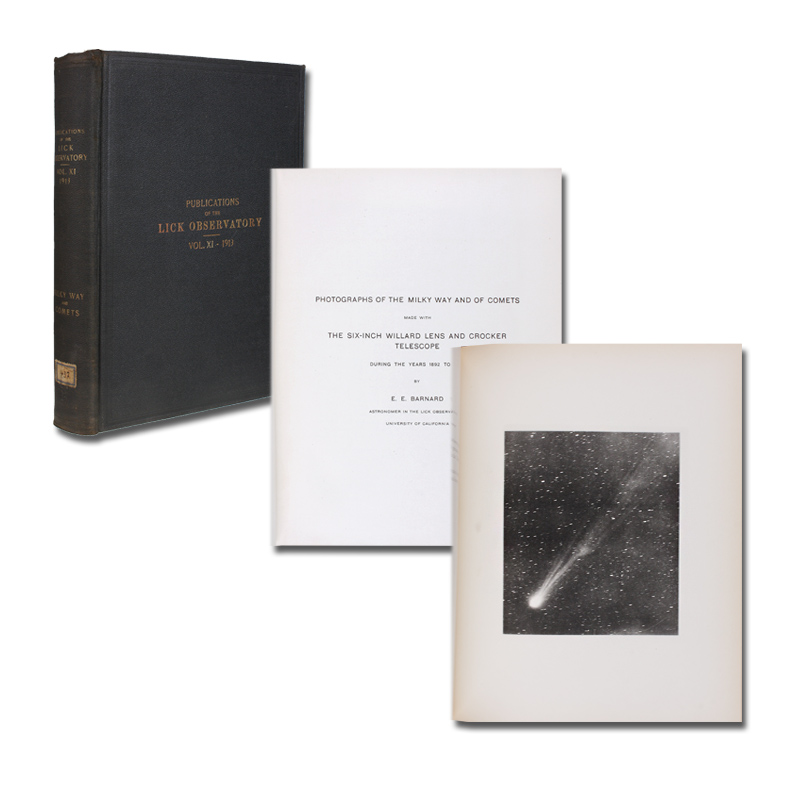 103872-01  Barnard, E(dward) E(merson).
Photographs of the Milky Way and Comets made with the Six-inch Willard Lens and Crocker Telescope during the Years 1892 to 1895. (30 x 23,5 cm). 46 S. Mit 129 Tafeln. Original-Leinwandband. (Publ. of the Lick Observatory. Vol. XI).
Sacramento, Richardson, 1913.
Erste Ausgabe. - "Of great importance was the beginning Barnard made in photographing the Milky Way. It can fairly be said that, although photography had been used in astronomy to a limited and somewhat experimental extent, it was not until Barnard's wholesale use of it that the technique became a vital and spectacular part of regular astronomical observing. His initial labors in this area were not easy, because funds for equipment were scarce, and he was the junior member under a somewhat crusty and autocratic director, E. S. Holden. Barnard was obliged to use a small telescopic camera, contrived from a 2 1/2-inch portrait lens with a focal length of thirty-one inches, initially strapped to the side of a 6 1/2-inch telescope for want of a suitable mounting and guiding arrangement. With so small a telescope, exposures were necessarily very long; moreover, photographic materials were still rather primitive and insensitive. Nevertheless, Barnard's Milky Way photographs revealed a wealth of both bright and dark nebulae, and star-clouds hitherto unknown. The long exposures (up to six hours) were made with extreme difficulty and required great patience, for the guiding telescopes were without illuminated reticles. He was obliged to use fine iron wires for cross hairs, and to throw the image of a bright star out of focus, maintaining equal intensity in all four quadrants separated by the wires' silhouette. Many of these remarkable photographs of the Milky Way and clusters, as well as of comets, were later assembled into Volume 11 of the Publications of the Lick Observatory" (DSB). - Vorsatz gestempelt und im Falz gebrochen. Rücken gering berieben, sonst sauber und gut erhalten. - DSB 1, 463