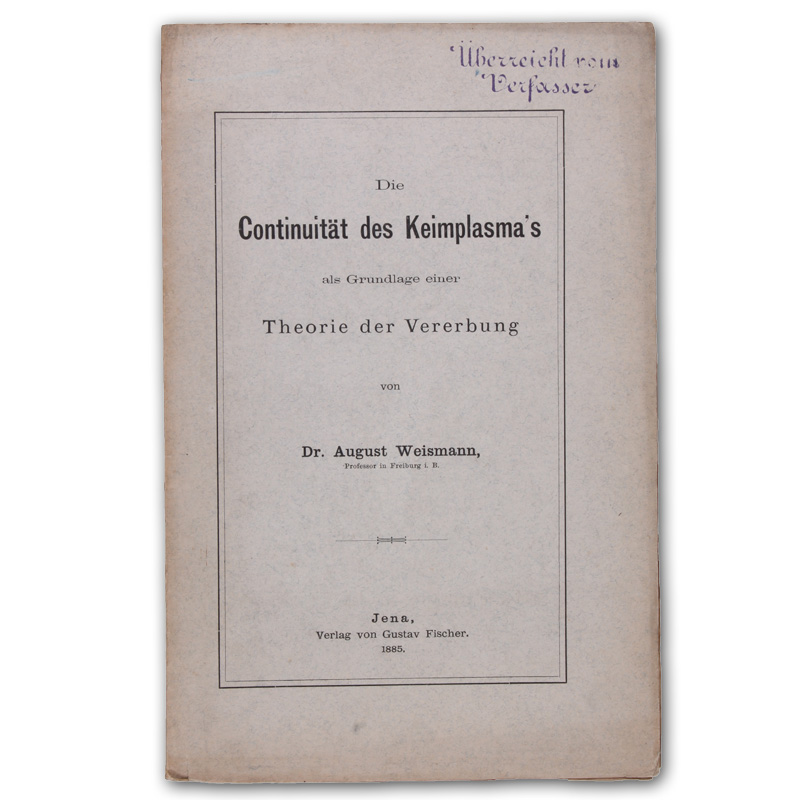 112182-01  Weismann, August.
Die Continuität des Keimplasma's als Grundlage einer Theorie der Vererbung. (23,5 x 15,5 cm). VI, 122 S. Original-Broschur, unaufgeschnitten.
Jena, Fischer, 1885.
Erste Ausgabe mit gestempelter Widmung des Verfassers. - "In 1884 several scientists including Weismann independently came to attribute the main role in heredity to the nucleus... In the essay 'The Continuity of the Germ-Plasm' (1885) Weismann reflected upon his new views, for he now located the germ plasm more precisely within the nucleus, and he took up other questions as well. He still had some reservations as to whether the idioplasm was definitely to be identified with the portions of the nuclear filaments that took up chromatin stain, although he had decided that the nucleus indeed contained the idioplasm of Naegeli. Weismann made his stand on the germ plasm clear: Germ cells did not necessarily lead directly to other germ cells, for germ plasm might be transmitted through a series of cells - its particles remaining discrete - before reproductive cells were again formed" (DSB). - Gutes und nahezu fleckenfreies Exemplar. - DSB 14, 232; Dibner 200; Norman 2195.