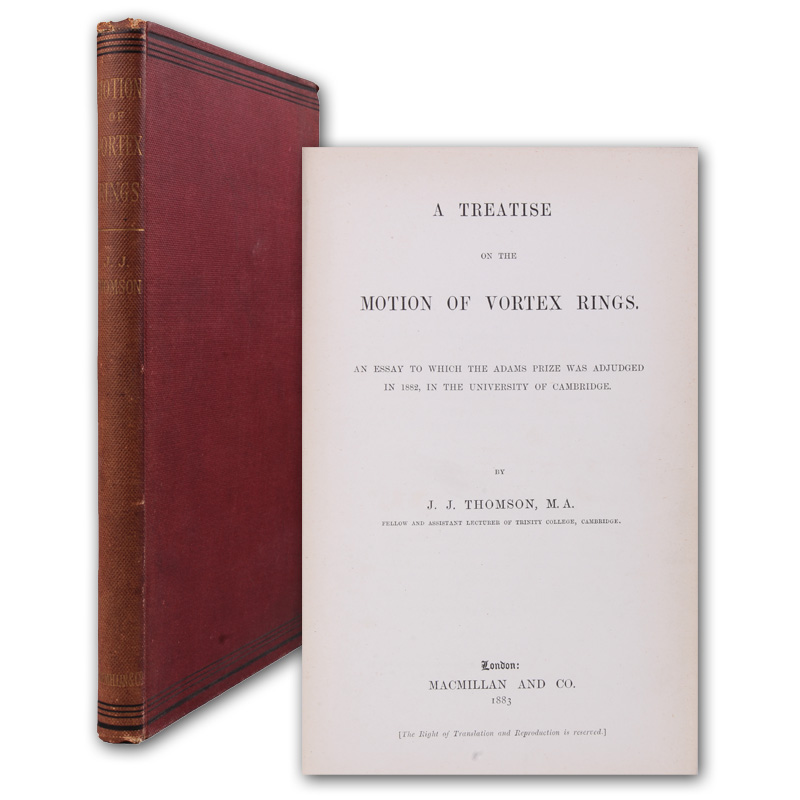 112236-01  Thomson, J(oseph) J(ohn).
A treatise on the motion of vortex rings. (22,5 x 13 cm). XIX, 124 S. Original-Leinwandband.
London, Macmillan, 1883.
Erste Ausgabe seines ersten eigenständigen Werkes. - "Thomson's earliest effort at designing models was stimulated by the subject set for the Adams Prize of 1882, 'a general investigation of the action upon each other of two closed vortices in a perfect incompressible fluid'. In his winning 'Treatise' Thomson carried the matter further than required, to an application which, for him, gave it 'the greater part of the interest it possessed', namely Kelvin's theory of the vortex atom (1867). Here the atoms of a gas are represented as reentrant vortices in a frictionless fluid, rather like smoke rings in air; but the vortices, unlike the rings, are eternal, and therefore could reproduce the permanence of the Victorian atom... In this sense the theory of the vortex atom is perhaps the most fundamental ever started, for it hoped to make do with nothing besides the several perfections of its primitive fluid and pure mathematical analysis. 'The difficulties of this method are enormous,' Maxwell had written, 'but the glory of surmounting them would be unique.' Thomson's 'Treatise' is perhaps the most glorious episode in this hopeless struggle" (DSB). - Einband leicht bestoßen und Rücken etwas ausgebleicht, sonst sauber und gut erhalten. - DSB 13, 362