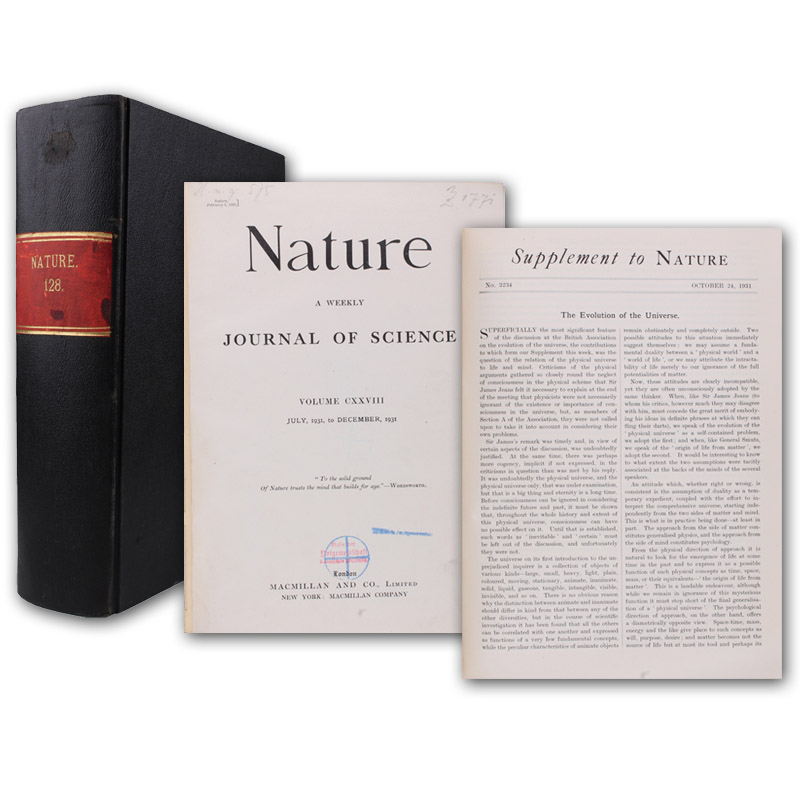 112344-01  Lemaitre, (Georges).
The Evolution of the Universe. SS. 704-706. In: Nature. Vol. 128. (26,5 x 19 cm). LXIV, 1088, XII S. Mit zahlreichen Abbildungen. Halbleinwandband der Zeit.
London, Macmillan, 1931.
Erste Ausgabe dieser bedeutenden Arbeit zur Urknalltheorie. - "Lemaitre's model was nonstatic and included a red shift caused by the Doppler effect. Affect his return to Louvain, he developed his theory further, and in 1927 he published a new cosmological theory that combined the advantages of the earlier theories of Einstein and de Sitter. Lemaitre showed that the field equations of general relativity allowed an expanding universe and derived a velocity-distance relation. Although Lemaitre's universe was expanding, in 1927 Lemaitre's theory did not involve a creation or a definite age. The basic equation of Lemaitre's theory was nearly the same as the one found by Alexander A. Friedmann in 1922, but Lemaitre had been unaware of Friedmann's work. Lemaitre's paper went unnoticed until 1930, when he called Eddington's attention to it. Eddington strongly endorsed Lemaitre's work and had it translated into English. In 1931 Lemaitre moved from obscurity to fame. He suggested that the world might have originated from just one quantum of enormous energy and later the same year he developed this scenario into the hypothesis of the primeval atom. According to Lemaitre's 'fireworks theory of evolution' the world started as a super-radioactive disintegration of the primeval atom. During the 1930's he published several expositions of this idea, the first example of a big bang cosmology. He believed that it could be put to observational tests and that the cosmic rays were remnants of the original super-radioactive disintegration" (DSB). - Gestempelt. Einband und Vorsatz leicht berieben, sonst sauber und gut erhalten. - DSB 18, 542