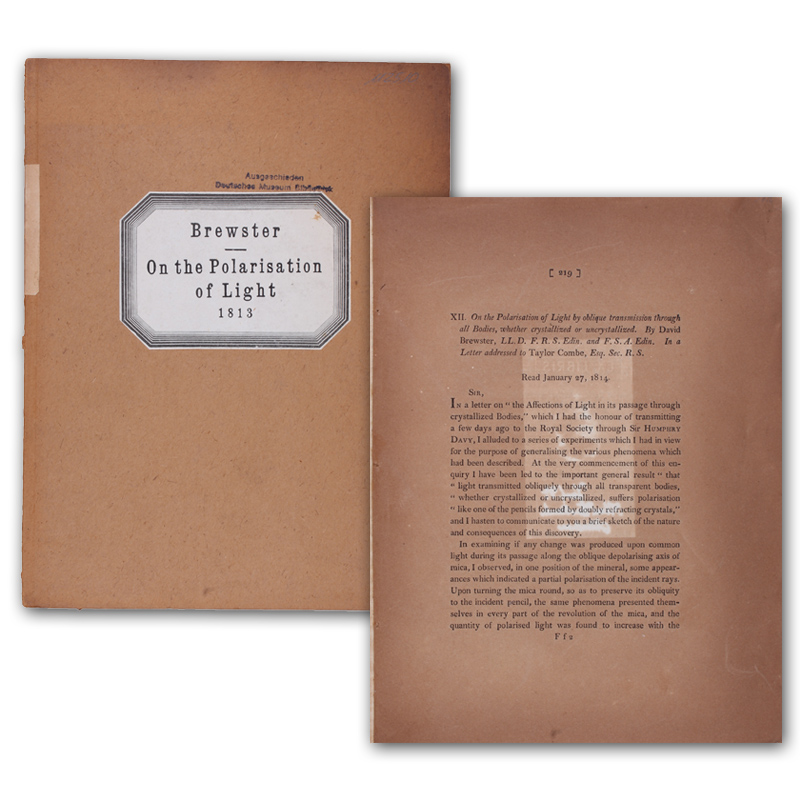 112510-01  Brewster, David.
On the Polarisation of Light by oblique transmission through all Bodies, whether crystallized or uncrystallized. (28 x 21,5 cm). SS. 219-230. Mit 1 gestochenen Tafel. Kartonband um 1920. (Sonderdruck aus: Philosophical Transactions).
(London, Bulmer, 1814).
Erste Ausgabe dieser bedeutenden Arbeit zur Theorie des Lichts. - "Since Brewster had found that light was partially polarized by oblique refraction in mica, he attempted to determine the law of this polarization in the simpler case of successive refractions by a pile of thin glass plates. By the end of 1813 he had concluded that 'the number of plates in any parcel, multiplied by the tangent of the angle, at which it (completely) polarises light, is a constant quantity.' More important, since 'the pencil of light polarised by transmission (comports) itself, in every respect like one of the pencils formed by double refraction,' study of the physical optics of transparent bodies ought to enable philosophers 'to unfold the secrets of double refraction, to explain the forms and structure of crystallised bodies, and to develope the nature and properties of that etherial matter, which... performs... a capital part in the operations of the material world.' Nothing less was at stake than understanding of the structure of organized matter and the nature of light. In conceiving of his results in this way, Brewster defined much of his optical career for the next twenty years" (DSB). - Exlibris. Stellenweise leicht gebräunt. Erstes und letztes Blatt durch den holzhaltigen Einband stark gebräunt. Stempel auf Einband. - DSB 2, 451